OK. I’m gonna write this in English cause I realize that my English sucks and I need to improve it. Practice makes perfect, no?
Several months ago, on March 2015 to be exact, I had a chance to visit Derawan Islands in East Kalimantan, Indonesia. And here goes the story..

On 26 March, Anna, a German friend of mine, texted me at 2.14 AM. Yep. A freaking M. She said good morning (morning she said?!) and told me to get ready cause we had a flight to catch at 5 AM. Around 4 AM we already arrived at Soekarno Hatta and met other Kakaban (the name of the agency) tour’s participants.

After 2.5 hours flight from Jakarta to Tarakan we finally arrived in Kalimantan! Yeay! We had lunch and went straight to Derawan Islands by a boat with a crazy captain called Dwi with a boat named Dwi Putra.

We spent around 5 hours in the boat, with a crazy captain, on a high tide (I think it was because of the tide that we needed 5 hours to reach Derawan). Some of the participants were already felt sick. I took some pills to prevent motion sickness before so I basically just fell asleep most of the time. So, remember, took Antimo before! And I hated the captain that much at that time, cause he drove recklessly and acted like a crazy person.

Aaand.. Look what we saw after 5 hours, this beautiful Maratua Paradise Resort! 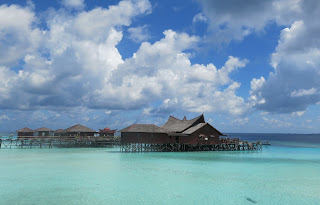 Just look at the water 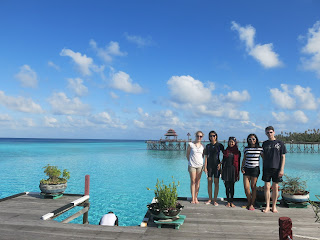 But, wait, Anna, Fitsa (another friend of mine), and I didn’t stay at that fancy luxurious resort.. Instead we stayed in a home owned by a local. Too poor to stay at the resort. But hey, support local product, no? Cause I heard that the fancy resort isn’t owned by Indonesian. In our “modest” room, the was only a bed, not that big, for three of us, and it only had a bak mandi with a gayung and a squat-toilet and Anna couldn’t use it so she asked me how to use gayung. Thank god she didn’t ask me how to use the squat-toilet. I talked to our guide immediately, Mas Boyo, because we just didn’t like the room. How fussy we were. Sorry not sorry.

Woke up in the morning hearing a super noisy sound from the Air Conditioner. And that day, I had my first snorkeling experience! It was near Derawan Island. It was.. green. All I saw was green, not that good and I didn’t see the turtles despite the fact that I was on Turtle Point. Oh FYI I wasn’t a swimmer, I couldn’t swim at all so I couldn’t move anywhere so Captain Dwi had to drag me. Turned out he wasn’t that crazy and annoying at all.. If it wasn’t because of him I’m sure that I was just stay still waiting for any passing turtle to drag me. 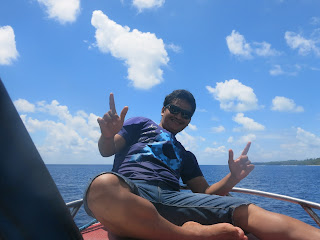 Captain on his boat 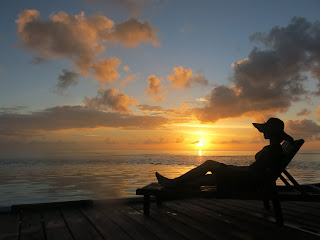 Me, enjoying sunset from the resort that I couldn't afford

And at night, we moved to another house, which was better, and the food.. Just see it : 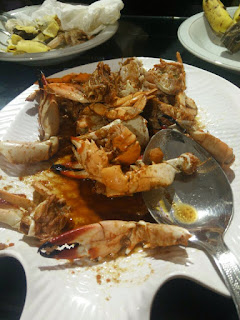 Ok, morning again, wear my swim suit, pack my snorkeling equipments, went to Nabucco Island. I wanted Coca-Cola so bad and the price was in Euro.. Wait, where was I?! 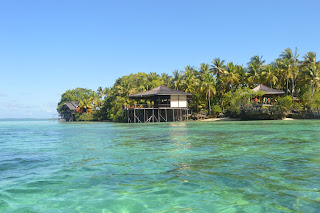 Nabucco Island, the resort is owned by Germans

Went to another Gusung Island, and before lunch we went (not that) deep into the forest to see Haji Mangku (small) lake. It was really really breathtaking. It was so blue and glowing and….the water was cold. And I didn’t have the guts to jump from the cliff to lake. Just no. 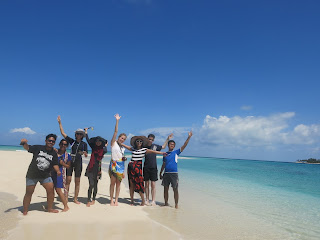 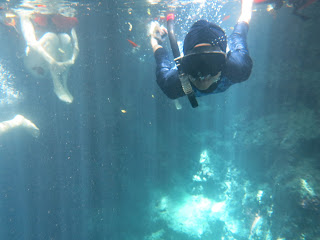 After lunch in Maratua Resort, ehm, as non-guests from the resort we didn't have any rights to take the food there so we had special lunch..in a box. We went to the iconic Kakaban Island, to the Jellyfish Lake! We couldn't wear our fins there and no sunscreen too cause it would hurt them. They looked so fragile and smooth, sleek, cute. I actually kinda hope that the place won’t ever be famous, I don’t want the cute jellyfish get exposed too much especially from human. 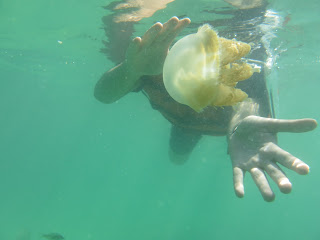 Me and the jelly

Then, snorkeling to see “Wall Point”. It was the true definition of beauty. It was so beautiful I can’t even describe it. 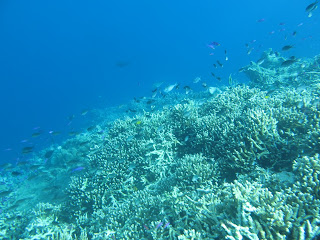 On 29 March we headed back to Tarakan city, into the Mangrove Forest, they said that we could see Bekantan there. All I saw were trashes. And no Bekantan. Maybe it was only a legend or rumour that once a family of Bekantan had lived there..

Some pictures were taken by me and some by Kakaban team. 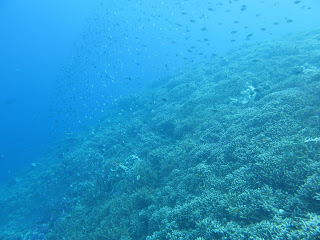 OK. It's the last photo from the Wall Point.

Anyways, I'm going to share my recent trip to Nusa Lembongan on May 2017.